Firstly, from the above study, considering the influence of processed meat on people's health, it's absolutely nutritious to some extents, but such sorts of meat processed with smoking, salting or curing added with preservatives as bacon, ham, salami, hot dog, some sausages, and pastrami are relatively harmful to people's stomach, thereby causing the deterioration in the stomach known as stomach cancer. The truth is, various types of dishes are salted to intensify their flavor, at the same time, make them more digestive, but the truth is, scientists have revealed that salty foods like bacon and even dried fish or pickled vegetable can result in miserable stomach cancer. Besides, grilled meat or fish also play a part in increasing the risk of stomach cancer for people. Therefore, it would be better to raise strong awareness before choosing any kinds of meat to consume.

The real life of stomach cancer patients is so adverse because most of those who are diagnosed to catch stomach cancer right at the time it spreads on all over their body. In some fortunate cases, under the perspective of Cancer Research UK, the patients diagnosed with stomach cancer, if live well, can still maintain their life two years more. 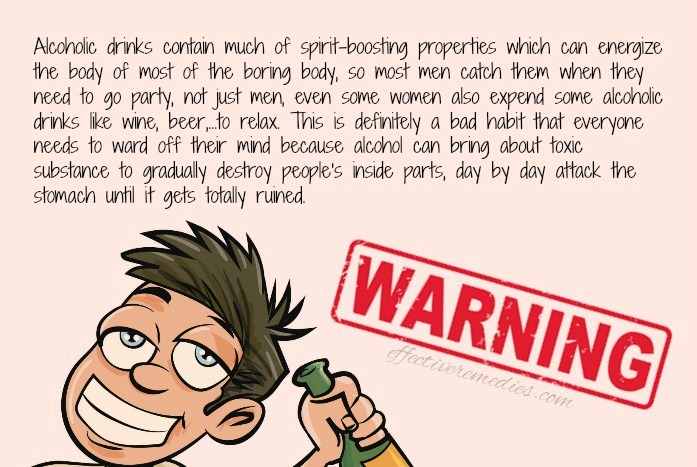 According to the report of AICR, there is strong proof that drinking approximately 3 alcoholic drinks or more per day can lead to the increased risk of stomach cancer. Alcoholic drinks contain much of spirit-boosting properties which can energize the body of most of the boring body, so most men catch them when they need to go party, not just men, even some women also expend some alcoholic drinks like wine, beer,…to relax. This is definitely a bad habit that everyone needs to ward off their mind because alcohol can bring about toxic substance to gradually destroy people's inside parts, day by day attack the stomach until it gets totally ruined. Then, when being conscious, it is too late for people to return the time machine.